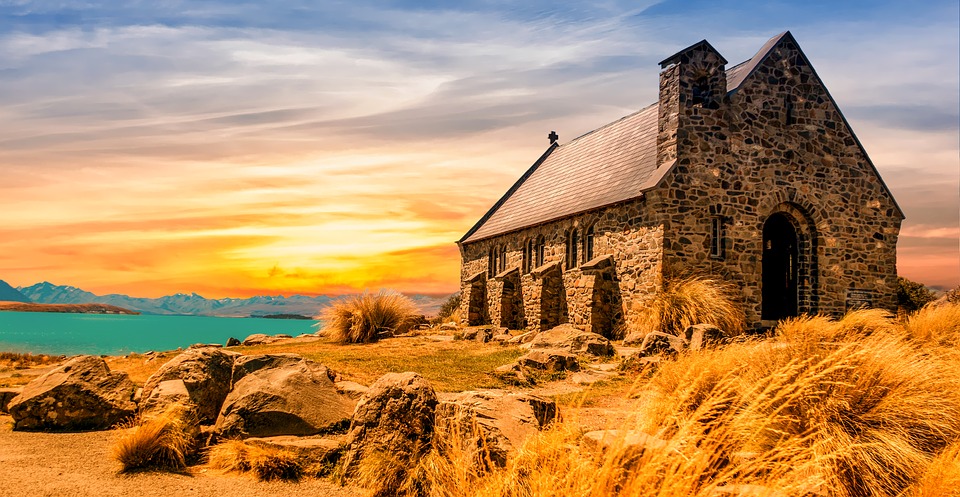 The core faith of Christianity is that God came to earth from heaven as a human – Jesus Christ and lived, died, buried, resurrected and ascended back to heaven about 2000 years ago. The Bible is not a religious book, but a divinely inspiring historical record of God's plan of redemption for perishing world.The history of church is the study which describes how the mighty hand of God worked through different people to establish His divine plan of restoration of human from isolation into live communion with God.

After the birth of Jesus, during AD 26 He began public ministry in and around Jerusalem. During AD 30 the crucifixion, death and resurrection of the Jesus Christ taken place. After Jesus ascended to heaven, during AD 48, Apostle Paul began his missionary journeys among the gentiles as Jesus instructed to him. Paul has travelled through a lot of places and he established this new environment (church) among their mists wherever he went. As Jesus prophesied during AD 64 the great tribulation started and Emperor Nero persecutes and kills Christians as well as Jews. During AD 90 Gnosticism (salvation could be gained through secret knowledge) has risen up but in AD 95 again persecution spread all over by the influence of Emperor Domitian.

Some years later, during AD 125, again Gnosticism started spreading slowly and Polycarp, disciple of Apostle John was burned at the stake in AD 155. During that period itself the idea of Montanism, which supposed belief in a new Church of the Spirit also proliferated among people. In AD 180 Irenaeus, disciple of Polycarp, wrote against Heresies and during AD 216 Manicheanism (a belief system that the universe was dominated by two competing forces of good and evil, represented by light and darkness) started spreading. During AD 303 – 305 the Emperor Diocletian persecuted Christians rudely.

In AD 313 the Edict of Milan letter got signed by the Roman emperors Constantine and Licinius - an agreement to end persecution of Christians. During AD 325, it got created, the first council in the history of the Christian church - The Council of Nicaea was intended to address the entire body of believers. It was then convened by the emperor Constantine to resolve the controversy of Arianism, a doctrine that carry Christ was not divine but was a created being - originated with the Alexandrian priest Arius. In AD 381 the Council of Constantinople (the second ecumenical council of the Christian church, summoned by the emperor Theodosius) was established that condemns the idea of Apollinarianism and Montanism. Apollinarianism argues that Jesus had a normal human body but the mind of Christ was solely divine instead of a regular human soul.

During AD 395 – 430, Bishop of Hippo – Augustine created a theological system. During AD 397 Council of Carthage identifies the Canon of Scripture (the word Canon is used to describe those books recognized as divinely inspired by God). In AD 405 Jerome completed translating the Bible into Latin. During AD 431 Council of Ephesus condemns Nestorianism and Pelagianism (Adam's sin wont affect the future generations of humanity). In AD 451 The council of Chalcedon condemns Apollinarianism, Eutychianism, Nestorianism and Monophysitism. In AD 553 The second council of Constantinople condemns Nestorianism. Eutychianism taught that Christ has two separate natures resulting in two different persons residing in the same body. Monophysitism taught that Christ has one nature, a divine one not two. Nestorianism taught that Christ was two distinct persons, divine and human.

In AD 590 Gregory the Great, became the first Medieval Pope. During AD 680 – 692 Eastern and Western Churches drift apart, the medieval Christianity split into two branches Eastern Orthodox Catholics and Roman Catholics. In AD 787 the second council of Nicaea condemns the veneration of icons (an image of Christ, Saints, Angels, important Biblical events, parables, or events in the history of the Church). In AD 800 Charlemagne crowned as the first Holy Roman emperor in Rome by the pope.

In 1054, an event Great Schism carried out that breaks the differences between the Western and Eastern. During 1097 – 1099 The first Crusade to the Holy Land was a military campaign by western European forces to recapture Jerusalem from Muslim control. The first crusade was the response to a very inspiring speech by Pope Urban II. In 1175 Peter Waldo commissioned the translation of the Bible into the vernacular language. In 1230 The Papal Inquisition. In 1251 Introduction of the Doctrine of Transubstantiation (The bread and wine of the Eucharist is transformed into the Body and Blood of Jesus Christ) by the Roman Church.

During 1309 – 1378 The Babylonian Captivity -a number of people from the ancient Kingdom of Judah were captives in Babylonia. During 1378 – 1417 The Papal Schism - three men simultaneously claimed to be the true pope. In 1382 Completion of Wycliffe Bible has done, a translation of the Latin Vulgate into English. And in 1384 John Wycliffe (The first person to translate the Bible into English, who is known as the “Morning Star of the Reformation”) died due to stroke. In 1413 John Huss wrote the famous book De Ecclesia and in 1415 he got (lit a fire of both nationalism and church reform) burned at the stake. In 1450 Johann Gutenberg invents the Printing Press (a way to fix metal letters very accurately and print using ink). In 1478 The Spanish Inquisition happened (Anyone disloyal to the Roman Catholic put to death by burning at the stake) Many Protestants, Jews and Muslims were killed. In 1492 Girolamo Savonarola preached reform through his prophecies and in 1516 Erasmus published the Greek New Testament Text.

In 1517 Martin Luther the German theologian brought Protestant Reformation through his theses, and in 1519 Ulrich Zwingli’s preaches got sparked as Swiss reformation. In 1535 The Coverdale Bible, the first complete English Bible got printed and in 1522, Luther translated the New Testament into German. In 1526 William Tyndale completed translation and printing of New Testament from Greek into English. In 1536 John Calvin published Institutes of the Christian Religion and in 1541 John Knox got leaded reformation in Scotland. During 1553 – 1558 Mary Tudor persecuted protestant Christians in England. During 1545 – 1563 Council of Trent initiated the Counter Reformation (clearly specified Catholic doctrine on salvation, the sacraments, and the Biblical canon, answering all Protestant disputes). In 1560 Puritanism started in England and during 1618 – 1619 Dutch got Reformed and Synod of Dort was convened. In 1611 King James got published Version Bible which was then translated by the Church of England. In 1620 Pilgrims set sail on the Mayflower to America (The Mayflower was an English ship that transported the first English Puritans, known today as the Pilgrims). During 1643 – 1652 the Westminster Assembly was formed to discuss reform of the Church of England and in 1648 Westminster Confession of Faith got approved and accepted by English Parliament at the End of the Thirty Years’ War between Roman Catholics and Protestants.

In 1674 Isaac Watts was born, the English Nonconformist minister, regarded as the father of English hymnody. In 1678 John Bunyan published the Pilgrim’s Progress - a Christian allegory. In 1729 Jonathan Edwards the American revivalist preacher, philosopher, and Congregationalist Protestant theologian preached in Northampton and in 1738 Conversion of John and Charles Wesley proven out. In 1739 The Great Awakening of a religious revival that swept through the American colonies led by George Whitefield. In 1764 John Newton wrote ‘Amazing Grace’ the most beloved hymn, the words from his personal experience and in 1780’s Robert Raikes developed ‘Sunday School’.

During 1790 The Protestant religious revival, second Great Awakening began in America. In 1793 William Carey, founder of the English Baptist Missionary Society sailed as missionary for India. In 1835 Robert Murray M’Cheyne pastored a Presbyterian church in Scotland and in 1836 George Muller opened an orphanage in England. In 1847 William Chalmers Burns initiated missions work in Shantou, China and in 1854 Charles Spurgeon the ‘Prince of Preachers’ preached in England, in 1854 Hudson Taylor began missions in China. During 1873 – 1875 DL Moody started revival meetings and in 1881 Westcott and Hort published the corrupted Greek Text. In 1906 Azusa Street Revival marked as the rise of the Charismatic movement and during 1910 – 1915 Published a new statement of the fundamentals of Christianity ‘The Fundamentals’ a set of ninety essays.

In 1924 Auburn Affirmation, signed by 1274 Presbyterian ministers in America denied the fundamentals of the Christian faith. In 1925 Eric Liddell, the Scottish Olympic Gold Medalist runner and Christian missionary served as a missionary in China. In 1937 Carl McIntire founded Faith Theological Seminary and the Bible Presbyterian Church in America. In 1929 John Gresham Machen founded Westminster Theological Seminary. In 1930s John Sung marked at the revival in South East Asia. In 1942 the National Association of Evangelicals was formed, a Neo-Evangelical organization. In 1948 the world Council of Churches formed International Council of Christian Churches. In 1955 Timothy Tow founded Bible-Presbyterian Church in Singapore and in 1962 he established Far Eastern Bible College. In 1979 Calvary B-P Church (Pandan) got founded and in 1994 Ecumenical “Evangelicals and Catholics Together” document signed by Evangelicals and Catholics ministers in America. In 2003 True Life B-P Church began to worship in RELC. In 2008 Lawsuit to evict FEBC and in 2011 Court of Appeal rules in favor of FEBC. And in 2014 High Court outlines Terms of Scheme for FEBC’s use of premises.